In December, 1963 I attended a chemical engineering symposium at a hotel in downtown Houston, Texas. I got up extra early one morning and walked over to the SP station to see the westbound Sunset Limited. The walk took longer than I anticipated and I arrived at the station just as the train was leaving (about 7:45 AM). I had a camera with me but I was able to take only two photos of the train as it passed through a curve just west of the station. They are not really very good photos but they were my very first of the SP.

The westbound Sunset Limited's head end cars round a curve just west of the Houston station. 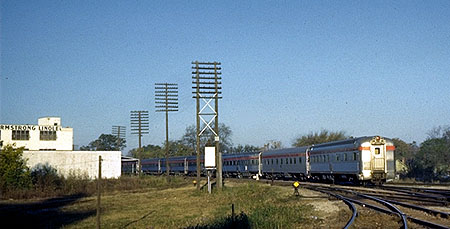 This page hosted by

Get your own Free Home Page